This question has always bugged me.

I’ve always wondered whether Chris knew about his Autism Spectrum Disorder (ASD). I have asked; he just replies with vague mumbles or changes the subject. What’s interesting though is that whenever he overhears someone talking about his condition saying he is stupid or dumb, he starts getting agitated and cross with everyone. Either he understands people are talking about him and he hates that its about his condition or it’s because he thinks he’s in trouble for something again. Call it Big Sister intuition, but I believe he has a vague idea about his condition mainly due to the fact that I have observed how upset he gets when he can’t do something- out of frustration he will cut the strings on his guitar because he isn’t capable of the proper motor coordination needed to play chords. Also, I believe he doesn’t care (or can’t) that much about it either, as he has never been able to think about himself in relation to other people.

Now we get down to the deeper stuff!

Baron-Cohen and Lombardo (2010) described how the Self in ASD is in paradox. ASDs are both egocentric and self-awareness impaired at the same time! Individuals with ASD often do not understand the “Duality of Self” which is how we can understand how we are similar yet distinct from others at the same time. When asked, individuals with ASD will not immediately represent themselves in relation to others in a social situation. They have a hard time understanding that they are similar to another. They are unable to perceive how another will feel about a situation. They lack Theory of Mind. However, sometimes if you simulate another’s experience through their own, they may be able to understand, especially if that other person is similar in a way to them. I interpret this in terms of my brother being more comfortable with male strangers around his height.

Physiologically, it is found that the ventro-Medial Prefrontal Cortex (v-MPFC) and Medial Prefrontal Cortex is implicated in self awareness. Neuro-typicals, when confronted with self-reflective questions will have higher activity in the v-MPFC and MCC, whereas in ASD the results are atypical. Additionally, Lombardo (2009) found that in a mentalising context, ASD individuals with higher self-awareness were less socially impaired and vice versa for ASD individuals with lower self-awareness.

As I am unable to mind-read, there is just absolutely no possibility of me ever understanding what goes on my dear brother’s head, whilst he cackles to himself drawing toilet bowls. Repetitively.  Have a look below at Christopher’s masterpiece! You can download it as wallpaper for free. I did! ❤ 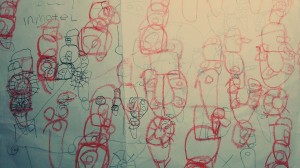 4 thoughts on “How Self-Aware are People with Autism?”